"For information only and not for publication before TX" A Story - Marty Is Forced To Change His Ways Marty is called upon to treat Danny, a young man found in a shop window, high on drugs, hallucinating, and HIV+, but as soon as he sees Danny, it's clear that they know each other. Danny reveals that he's not taking his HIV medication, and that he is essentially homeless, kicked out by his mother for his sexuality. Marty is devastated - this is one of the men he slept with the night before, and he can't remember using protection. His health and future in jeopardy, Marty struggles to maintain professionalism whilst treating Danny, who doesn't remember him. With his world crashing down around him, Marty snaps at Danny and excuses himself, and when Jade asks after him, she's shot down. Later, when Danny reconciles with his mother, after revealing to her that he's homeless, Marty watches on, bitter and hurt that his own parents want nothing to do with him. Outside, Marty breaks down, and admits the extent of his drug-taking and sexual experiences to Jade. She's heartbroken that her friend felt forced into this lifestyle through loneliness, and reassures him that he isn't alone. The friends have reconciled, and Marty arranges a trip to the sexual health clinic to reduce his chances of getting HIV. Determined to prove to Marty that he's got a support system, she dials his mother's number, and leaves him to answer. However, Marty's father answers, and tells Marty not to call again, as it upsets his mother. At an all time low, Marty bumps into Danny again, who's off out to carry on from last night, despite his mother inviting him back to live at home, and he invites Marty along. It's hard, but Marty refuses. Unlike Danny, he doesn't want to prioritise partying over loved ones anymore, and he joins Jade at the pub instead, waving goodbye to his dangerous lifestyle. B Story - Ethan Questions What He Really Wants Ethan notices Will's good mood, and questions how he manages to see multiple women each week, but a delighted Will reveals that he's a changed man, and is committed to one woman now. Inspired by Will's happiness, Ethan seeks out Fenisha and continues to flirt with her, asking if they could have a second date soon. Fenisha admits that she's seeing someone else. Hurt, Ethan distracts himself through treating party boy Danny, who states that he's craving unpredictable, exciting fun, which resonates with Ethan. He confronts an awkward Fenisha again, but tells her that he's genuinely happy for her, and is grateful because now he's realising what he really wants from life - freedom to be himself. But when Will arrives and kisses Fenisha in front of him, Ethan's resolve falters. Disappointed, he resigns himself to the fact that Will has won the girl, again. C Story - Dylan Denies Feelings For Faith When Audrey and her gardener, Eric, are brought into the ED, Faith and Dylan work together to treat Eric's injured hand. Audrey has fired Eric, and feeling rejected, he asks her to leave the ED, but a compassionate Faith finds her in Reception and encourages Audrey to be honest with her friend. Bolstered by Faith's kindness, Audrey admits to Eric that she only let him go to stop him losing her the same way he lost his wife, as she has lung cancer. Hopeful, Eric refuses to be fired, saying he wants to be there for her until the end. The pair kiss, as Dylan and Faith watch on. Hearts thoroughly warmed, Dylan and Faith arrange to go for a drink together, but when Dylan hears that Lev is invited, he cancels, to Faith's dismay. David notes that Dylan's behaviour indicates feelings towards Faith, but Dylan denies this, despite now knowing in his heart that he's in love with her.

How I Met Your Mother - Blitzgiving 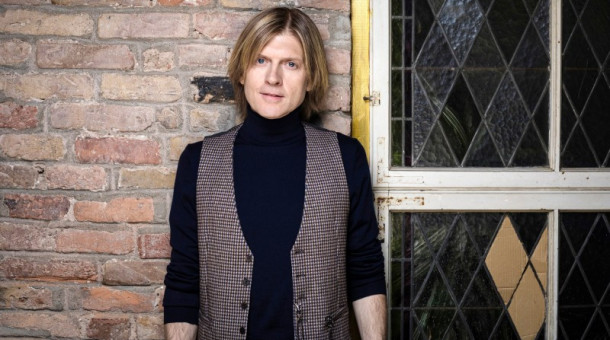